Female sexual desire has not always been seen as just another dimension of a woman as a person. But this day and age, things have changed, a lot.

The taboos about a woman’s sex drive, once barely accepted, break down little by little in our society.

Among these superstitious beliefs, one can come across the idea that women show less interest in sex during their period. However, this belief stems from a prejudice rooted in many cultures of the world throughout history. If you want to know more, read our post about Interesting facts about your period.

What happens to a woman’s body during period?

The symptoms vary from person to person, but the usual ones are as follows:

Why do women have it?

When an ovulation occurs, oestrogen levels increase in a woman’s body as it prepares for egg fertilisation. If a pregnancy does not occur, the levels of oestrogen and progesterone drop drastically and menstruation begins. All the womb lining and its tissue prepared for implantation of the fertilised egg get eliminated.

Although it may not appear so, it is also probable that you get pregnant during your period.

It is true that there are, sometimes even major, differences in sexual drive during the menstrual cycle, but they are not necessarily caused exclusively by hormones.

Extremely different voices and opinions are expressed about having sex during your period. Some women do not wish for it at all and some even feel better having sexual intercourse during their period.

One has to bear in mind that an orgasm releases a huge amount of endorphins. This reduces the pain and discomfort characteristic of a period. What is more, having sex during your period makes it shorter, given that uterine contractions help expel uterine lining faster.

Having sex during your period

Careful! The only health problem to do with having sex during your period is that the contact with uterine tissue and blood considerably increases the chances of getting sexually transmitted diseases. Of course, we are talking about a situation in which your sexual partner is a stranger or not the usual one, and we do not know if he may be infected.

On the other hand, from the scientific point of view, female sexual drive seen biochemically has a lot to do with the hormones and their fluctuations throughout their menstrual cycle.

A menstrual cycle last on average for 28 days and according to the experts, the libido rises as we approach fertile days.

However, as human beings, we are not only ruled by hormones and that is why many emotional factors come into play. The most important thing is to understand that if we fancy having sex during our period, we should talk about it with our partner to know their opinion and wishes.

Being able to trust your partner like this eliminates lots of obstacles, prejudice and limitations and helps having fully satisfying sexual relations.

Sexual desire during period may lead to pleasant, novel experiences. You may get to know yourself a bit better so maybe… it is worth a try? 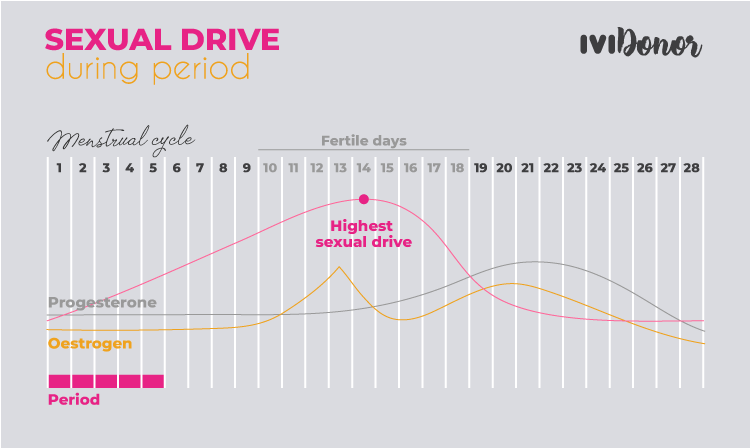 4 December, 2019
6 tips to reduce swollen feet in pregnancy
26 November, 2019
Food cravings the days before your period
19 November, 2019
Can I have sexual intercourse and be an egg donor?
Do you want to donate eggs?