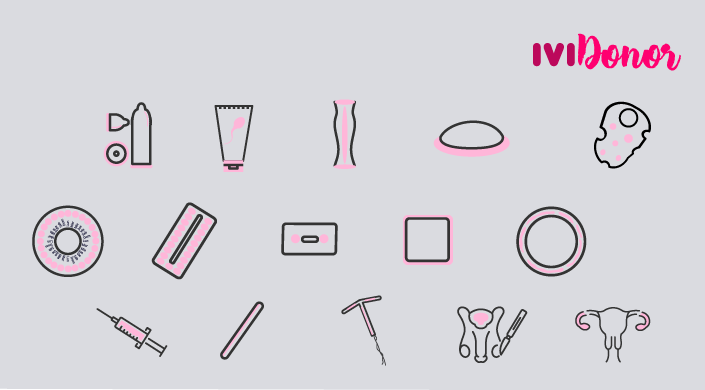 There are currently around fifteen different types of contraception available. Here, we’ve compiled a list with an explanation of each one. To find out which contraceptive might be right for you, we recommend thinking about your specific circumstances, reviewing each type and considering their unique risks and benefits. While many contraceptives are very effective in preventing pregnancy, it is important to remember that they do not all protect against sexually transmitted infections.

Condoms are the only form of contraception that protect against pregnancy and sexually transmitted infections. Due to their popularity, they are affordable and widely available. They are normally made from thin latex, polyurethane, polyisoprene or synthetic nitrile. They can also help to protect against vaginal infections. In ordinary circumstances, in which a condom of the right size is worn correctly, male condoms are 98% effective.

Spermicide acts as a chemical barrier. It prevents pregnancy by stopping sperm from reaching the uterus by blocking the entrance. It also affects the sperms’ ability to swim well. It must be used in conjunction with another form of contraception, such as a diaphram, because it is not effective in preventing pregnancy when used on its own.

Female condoms are normally made from nitrile rubber and are worn internally inside the vagina. Like male condoms, they protect against unwanted pregnancy and sexually transmitted infections. They are slightly less effective than male condoms at preventing pregnancy, at 95% effective.

A diaphragm, also known as a cervical cap, is a flexible silicone dome that is positioned against the top of the cervix, preventing sperm from entering the uterus. It can be used in conjunction with spermicides. It does not cover the mucous membrane of the vaginal walls and therefore it cannot protect against sexually transmitted infections. Some women may prefer to use a diaphragm because it is a hormone-free form of contraception. They are normally 94% effective at preventing pregnancy.

A vaginal sponge, also known as a contraceptive sponge, is a device made from polyurethane foam containing spermicide. It can be inserted manually in the vagina before sex to prevent against pregnancy. It does not protect against sexually transmitted infections. In order to be effective, the sponge must stay in place inside the vagina for 6 hours after sex. When used correctly, it is 88% effective.

The combined pill, often known as simply the pill, is a widely-used form of hormonal contraceptive for women. It normally involves taking one pill each day for 21 days before taking a seven-day break where you’ll have a bleed, much like a period. Excluding the morning after pill, contraceptive pills cannot be bought over-the-counter and will need to be prescribed by a doctor. As well as preventing against pregnancy, it can also help with hormonal problems, such as acne, heavy periods and menstrual cramps. It does not protect against STIs. When taken correctly, it is over 99% effective in preventing pregnancy.

The progestogen-only pill, sometimes known as the mini pill, emerged as a result of the side effects caused by the combined pill due to oestrogens. It is normally only prescribed in cases in which a woman is advised not to take oestrogen. It has to be taken every day, with no breaks, at roughly the same time in order to be effective. When taken correctly, it is 99% effective in preventing pregnancy.

The contraceptive patch is a square adhesive patch that is applied directly to the skin. It is very easy to use. It is changed once a week for three weeks with a break in the fourth week, in which you have a bleed similar to a period. When used correctly, the patch is 99% effective in preventing pregnancy.

A vaginal ring is a rubber ring made from an ethylene-vinyl acetate copolymer that releases oestrogen and progesterone. It is easy to use and can be inserted at home without medical assistance. Once inserted, it lasts for three weeks before it needs to be removed. In the fourth week, you will have a bleed similar to a period. When used correctly, the vaginal ring is 99% effective in preventing pregnancy.

This is a simple surgical procedure in which the vas deferens (the ducts which transport sperm), are either tied or severed depending on whether the procedure is intended to be permanent. It prevents sperm from reaching the uterus, thus preventing pregnancy.

This is carried out by means of a surgical procedure or by endoscopy. Tubal refers to a woman’s fallopian tubes, and the procedure involves cutting or blocking the tubes. It is a permanent procedure and cannot be reversed.

If you have any questions or concerns, you should always see a gynaecologist if you need help choosing the most suitable contraceptive method for you. Here at IVI, our expert team would be delighted to help. 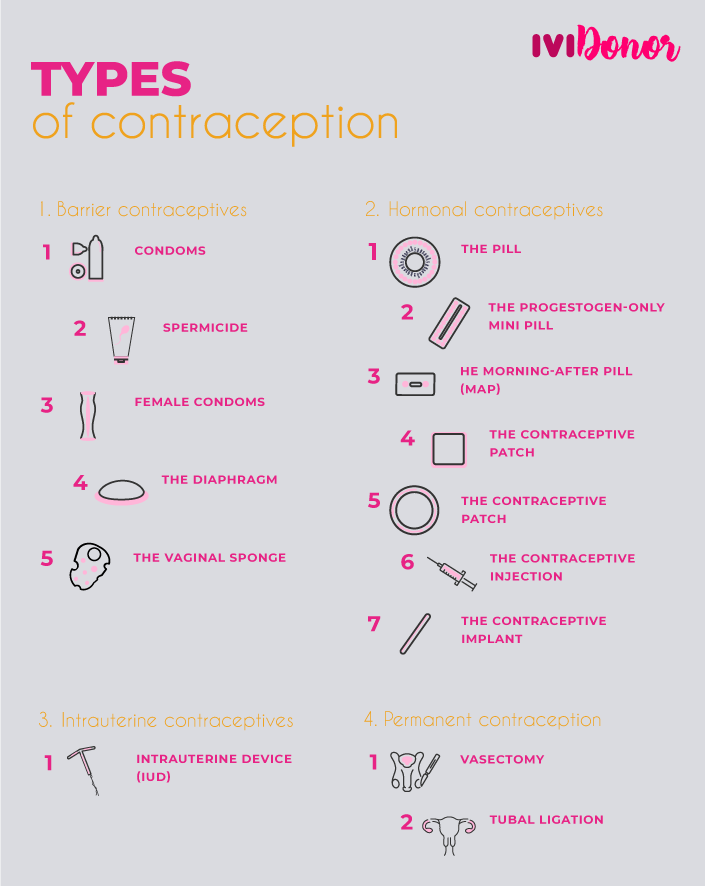